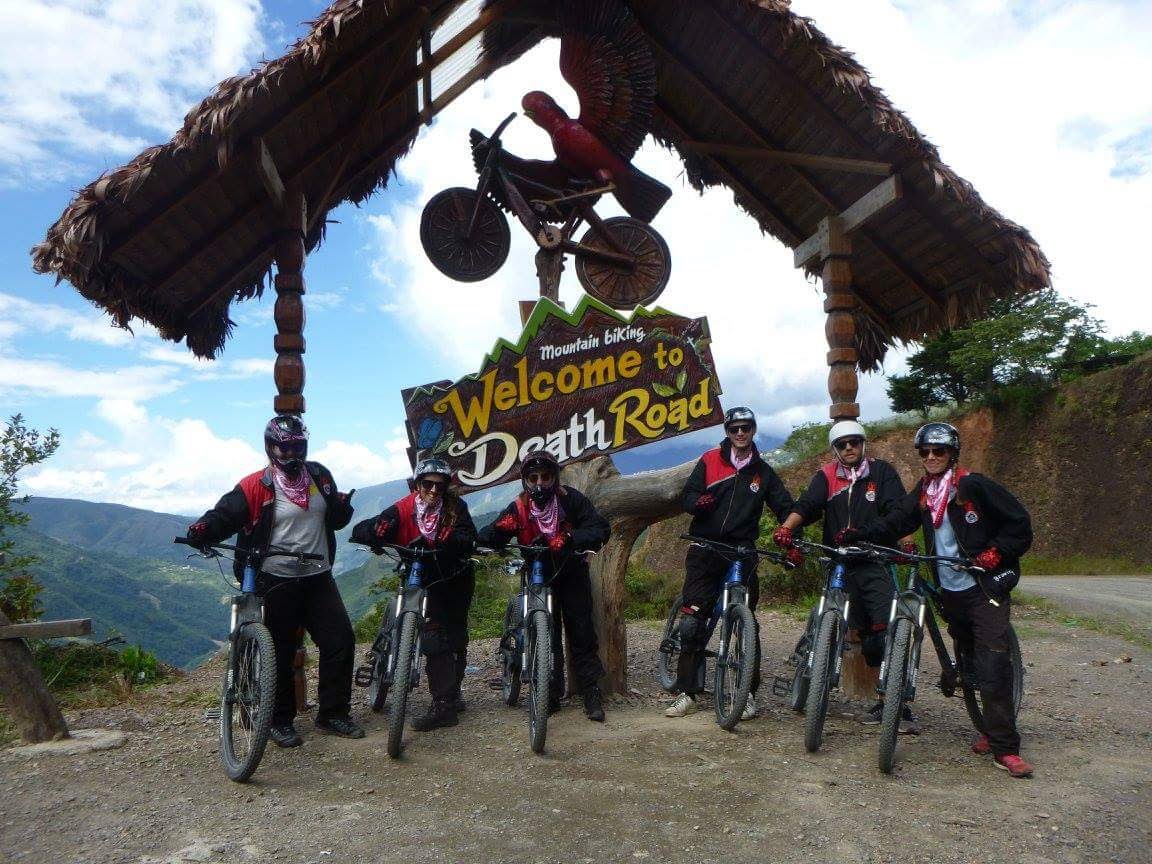 The morning was full of nervous anticipation as I considered the best outfit (and layers) appropriate for a descent from snow and 4,800m altitude down to hot sun at 1,200m.

Friends had been on the Death Road adventure before and said the scariest part was the bus ride back up, as it went on the same road and buses are a lot wider, it was scary manoeuvring around oncoming traffic, and of course there are all those you tube videos showing how buses can get stuck and fall of the cliff… doomed to the 500m+ sheer drop.

So when we were told that buses didn’t go up anymore since a new motorway was built, the whole thing seemed fine to sign up for.

How hard could it be!? There were no uphill parts so no pedalling, just grip those brakes and anyone can do that. Must be quite a leisurely ride, ‘just don’t look down the cliff’, I was thinking to myself.

Mo and Will from Gravity met our group at the hotel. We also had one tag-along joining us (to replace one of our tour members who had chickened out over night) – Andy, a young German traveler. Christian (our tour leader) knew Mo and gave us reassurance he was the best guide for the adventure. He was excited and had done the ride many times in his tours before.

The rest of us were excited too… In between a nervous pee or two. Or three.

The weather in La Paz was clear and sunny, but by the time we had driven up to the start of the ride, we were in the clouds, it was cold, and we were about to endure sopping wet rain (for at least the first two segments).

We were layered up with extra jackets and rain coats, then were ready to go. Not before the ceremonial blessing of our bikes. Or guide brought out a small bottle of liquid and proceeded to pour a little on the ground, a little on the bike tire, then took a swig himself. One at a time we all did the same. It tasted strong. 95% alcohol we are told. It warmed or throats and I could feel the burn as it sat in my stomach.

We were off, in single file following our guide.

The whole ride is broken up into about eight segments. The first 22km is on sealed highway road, and then the gravel, single lane, terrifying cliff drop part begins.

The first part was easy. My confidence was boosted and I followed third in line after the boys, and fast. I didn’t have the body weight to keep up with them and their gravity-assisted ride down the asphalt, so I pedaled fast to increase my speed even further. It was fun! Exhilarating! What made it challenging was the rain belting at our faces, minimal vision through the rain drops on our sunnies, and hooning down a wet slippery road surface. I was keeping up with the boys (just) and was loving the thrill of it all!

After a couple of photo-opp stops and checkpoints to make sure everyone was ok, my confidence continued to grow on each segment. Christian even joked that I was a bit of a speed demon! The rain didn’t bother me at all, I embraced the adventure and we were all having so much fun. (Except one member of our group that decided to jump on the bus following us down as her vision-impaired riding was just not enjoyable – fair call!)

We started on the next (and last asphalt) segment of the road and were all hooning down in single file. I came around a corner to find Andy stopped right in the middle of the road. I slammed on my brakes to avoid smashing straight into him.

What happened next was described as one of the most graceful bails anyone had ever seen. I like to think that my 20+ years of ballet brings grace and poise into a lot of aspects of my life – and this epic bail was no exception.

Slamming on my brakes on a sopping wet downwards slope meant for some foosball action on my bee back wheel. After swaying left, right, left, right, I thought I almost had myself under control but alas. I lost that chance of success and gracefully slid out so my right knee took the weight of the bike and myself, before doing a 180 horizontal spin on the asphalt and a mega slide backwards, with my feet facing towards the top of the hill.

Whoopsie! Was my first reaction as I kept up on my feet and walked with my bike towards the side of the road. Everyone had seen my fall, were surprised I’d jumped up and was ok – and blamed Andy for being so stupidly stopped in the middle of the road on a blind corner.

Adrenalin pumped through my body from the shock. I was standing, walking, talking. I was fine.

I then started to notice the pain in my right leg, all down the inside of my knee. Gratefully I was wearing so much wet weather gear that nothing was grazed. That would have ended in tears. #thoselegs

Oh it was sore. But I was determined to keep going. Funnily, riding the bike didn’t hurt my leg at all so I was confident I’d be sweet for the entire ride. It was just the walking that was starting to be a problem, as my knee started to swell and after being stationary for too long, get really stiff.

Thankfully I’d brought a full bottle of pisco with us and Josh grabbed it from the bus. A few swigs of straight pisco and I was good to go. I shared it around the group and we were all pumped for the most challenging part of the ride.

The following segments of Death Road lived up to their name. Gravel with what the locals called ‘baby skulls’, meant for a super scary and bumpy ride. Luckily we were in the clouds so couldn’t see the 500m drop to our left.

The guides were excellent. We had stops every ten minutes or so for photo opportunities and to rest our hands from gripping for dear life on the brakes over such bumpy terrain. Some more than others!

We biked under waterfalls, through rivers, next to massive cliffs. No sign of any safety measures whatsoever. Our guide even stopped to show us the remains of a yellow bus which had fallen in March last year, taking its driver and all passengers down with it. That was terrifying to think about.

The whole ride, although challenging, was so exhilarating. So much adrenalin was pumping through my veins the entire day, as I tried to go as fast as I could to keep up with Megan and the boys in front.

This determination didn’t fade, in fact got stronger, as we neared the end of the ride. By this stage we were down to 1,200m above sea level, it was hot, and the vegetation looked almost tropical. Our wet weather layers were all stripped off to enjoy the sunshine. We reached a town at the bottom and Mo called out to me “Just follow Christian!”. I could see Christian with Josh, Andy and Megan ahead in the distance, taking that left road at the fork and continuing to hoon off. Knowing we were almost at the end, I have the last segment all I had. I pushed the pedals and got up to a good speed. It felt great doing some proper exercise and getting a sweat on. It was also a nice treat to be at a lower altitude and could breathe properly.

I got lost in the moment, I was loving it.

I then also, got lost.

It wasn’t until I reached another fork in the road and I had no idea which way to go. I hadn’t really thought twice about the fact I hadn’t seen anyone in front or behind me for quite awhile. I just thought they were also gunning it out in front, and the girls behind me were perhaps a bit slower on the steep inclines I’d just powered through.

I was lost. I was alone. I was not supposed to be where I was. All I could do was jump off the bike and wait. Wait for our guides to realise I was gone and come find me.

After 15 minutes, luckily I saw Will biking towards me. He was more happy to see me than I was happy to see him, as I was still a little confused where everyone had gone.

So… totally Christian’s fault, but he and the fast three in our group had made a sharp left turn down a small path/driveway shortly after I last saw them back in the town, and didn’t realise I was behind them, just out of sight, and expecting to be guided to our final resting point.

I had biked an additional 14km on my own. I was exhausted because I had been pushing myself. Will then made me even more thrilled, to hear that I had to bike back the way I came (up a huge incline!!), and that all the others were enjoying beers and lunch – and had been for quite some time. Arghhh!!

Luckily the bus came to our rescue about half way back on our return and I was given a loud cheer and applause as I finally arrived at the sanctuary where everyone was about three beers in. That beer tasted better than any beer had ever tasted before. 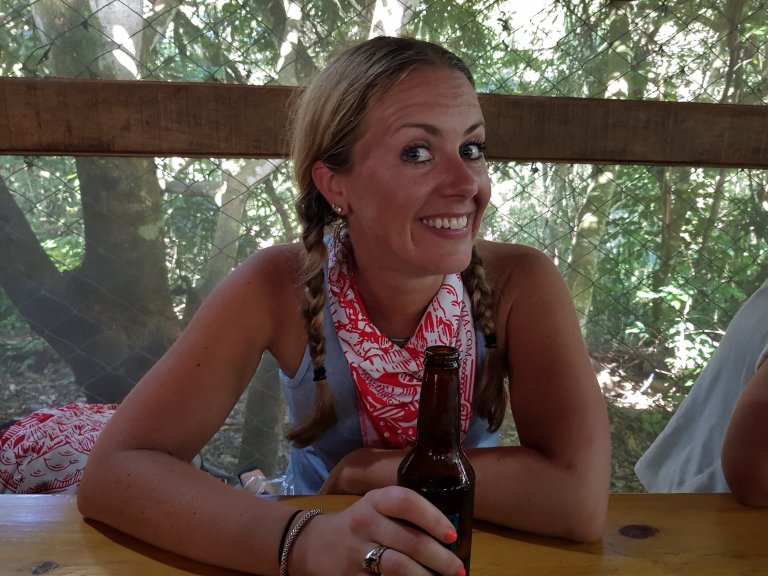 I was feeling on such a high after the day that the opportunity to give zip lining a go was an exciting bonus, as I’d never done it before. More nerves and adrenalin!

As we’d spent quite a bit of time at the sanctuary (due to me arriving at least an hour later than everyone else), and then the added zip lining tour, it was getting quite late. We needed to get on the bus for our three-hour journey back to La Paz.

It was a Bolivian public holiday that day. Luckily we were all well liquored when our guides said that the traffic was so bad on the new motorway… and the best way back to La Paz was back up Death Road. “You have got to be kidding!”, we all said.

A series of profanities came out my mouth as I thought about what was about to happen. I was scared. It was out of my control.

I sat on the left side of the bus and encouraged the others to do the same so there was no weight differential which could even slightly lean us towards the cliff edge.

Our thirst for the beers and the bottle of pisco grew, and we finished it off in a few swigs. All that we could do now was shut our eyes and hope that we made it to the top safely, without falling over the 500m drop, to our doom.

However, we cranked up the music, turned our nerves into excitement – and we got rowdy.

We sung at the top of our lungs… very badly. Cue Queen’s Bohemian Rhapsody, phone microphones, air guitars. We were going to survive Death Road.

What an amazing fun day with so much adventure. It was one of the most terrifying but exhilarating experiences I’ve ever had. The pain in my knee completely forgotten.